On a recent visit to Germany I was reminded of the stark differences between the German housing system and our own. In the UK people are encouraged to get on to the property ladder as soon as possible, with the age of first time buyers being seen as a crucial part of the economy with statistics regularly reported on in the media. Once on that ladder, people and families move up through the ladder to increase the size of their home in line with their growth in income all at the expense of ever larger mortgages. New housing is dominated by large house builders who generally build the same few house types the length and breadth of the country, adding a token different cladding or tile here or there to appease the local planners. Houses are sold by number of bedrooms not size and as discussed earlier and are nearly always undersized. But despite Government intentions to increase opportunities for self builders, plots are rare to come by, expensive to buy and difficult to get planning permission on, so the dream for the majority of Brits wanting to build their own home remains as a dream.

Due to a number of factors the age of first time buyers in Germany is typically much older than in the UK, but Germans do not buy into a property ladder, they buy a house to be the all time family home. So how refreshing it was to visit a show village for new houses in northern Germany. 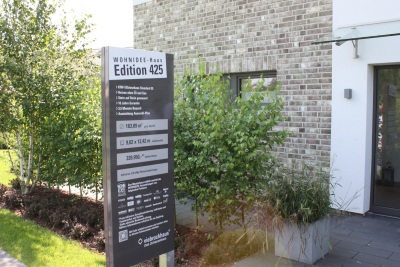 The Musterhauspark or model home park in Bad Fallingbostel has 12 different house types to view ranging from traditional German to a contemporary flat roofed house. But what made this show village different to English show homes is that none of them were for sale on the site, the advertised prices and details are the cost for them to be built on your plot. No, the German system does not expect you to move into a new house that has already been speculatively built on a plot of land by a developer in the hope that it will suit your needs. The biggest difference comes about from the actions of local councils. In both the UK and Germany local authorities control the provision of new land for housing, but unlike the UK where parcels of land too big for an individual to be able to develop are granted permission for say 500 new houses and sold to a developer, in Germany the local authority buys the land, builds the road and infrastructure and waits for people and families wanting a new house to buy individual plots from them. The result, more individual houses, planning permission is virtually guaranteed as long as a few principles are followed and missing out the profits of developers reduces the costs. 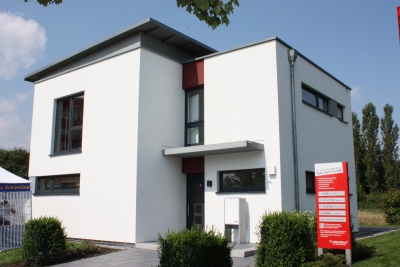 So if developers are not building the 500 houses on the edge of town who is building the houses? Well the answer is mainly the homeowner with differing degrees of professional and technical support. At one end of the spectrum you have people who approach an architect or designer to conceive their dream home and then employ a local contractor to build it. At the other end of the scale, you have people who want a less hands on approach, they employ a company who specialises in building new homes, who have a portfolio of houses to choose from and are only left with deciding on which house to choose and the style of bathrooms, kitchens and finishes etc. The Musterhauspark in Bad Fallingbostel is simply a portfolio of houses to visit, allowing potential buyers the opportunity to experience their future home albeit in a different location. Altogether at their parks the company has over 50 house types to view and that is from just one builder. Either by employing an architect directly, or by employing a house builder such as at Musterhauspark, the German homeowner ends up with greater choice and involvement in the process as well as better value for money. 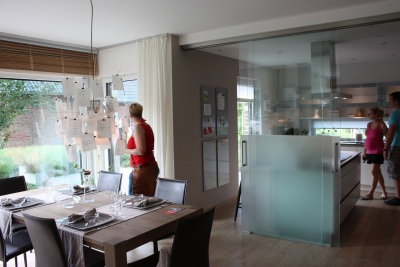 From visiting the houses it soon becomes apparent that our UK obsession with bedroom numbers does not cross the Channel, the houses at the park are mainly three bedrooms but the smallest of these is typically bigger than the so called master bedroom in the UK. The ground floors all have large open plan spaces and feel light and airy. The houses are also technically very good, with high standards of fabric insulation supplemented by renewable energy sources, as a result, most houses have plant rooms that are used to house the boiler, tanks and heating controls for the various solar panels, photovoltaic cells or heat pumps. For an example of this brilliance, one house on the site which is shown below had a roof slope comprising entirely of solar panels with no tiles underneath, now UK housebuilders have to go someway to match that. 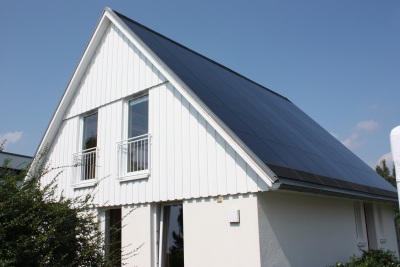 This entry was posted in Planning, Property, Self Build. Bookmark the permalink.