We have just gained planning permission for the extension of a 1950s house that has been built to an individual design with some great Arts and Crafts design features. Our proposal which extends the property to the rear will add 80m2 of accommodation. 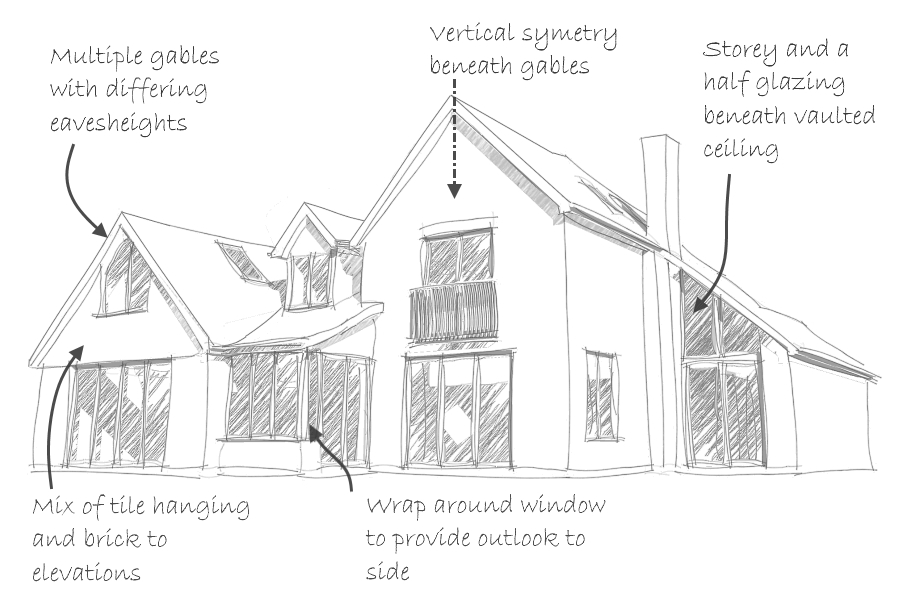 Our clients who we have worked with on their previous period property were clear that the proposal could not impact on the existing Arts and Crafts style frontage of their new home. 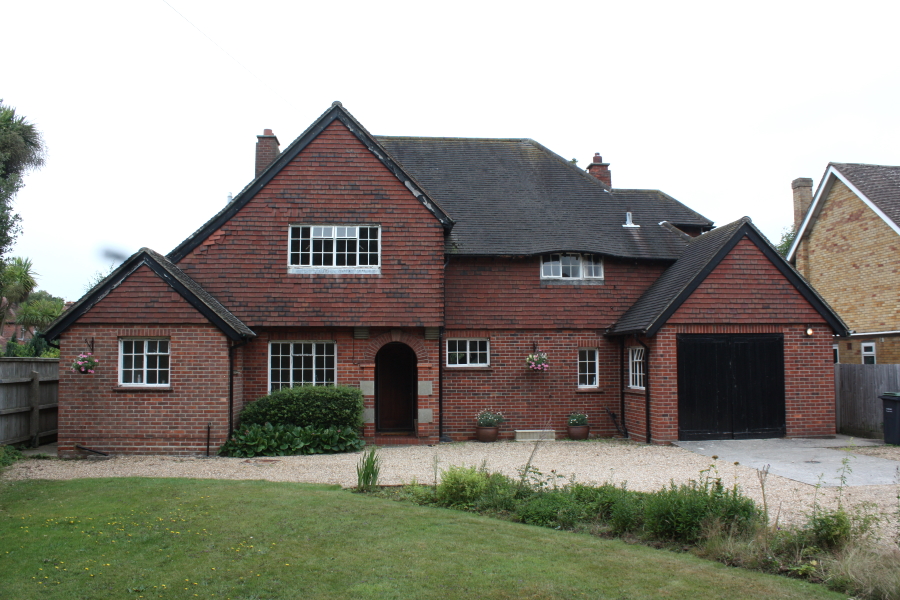 They were also keen that the work would respect the original design, but be carried out in a way that meets their family lifestyle. Whilst the existing house (shown above) features vertical tile hanging, handmade bricks, a cantilevered upper storey, a brick entrance arch, multiple gables and an eyebrow window and dormer window, the rear of the property (shown below) is quite plain by comparison. 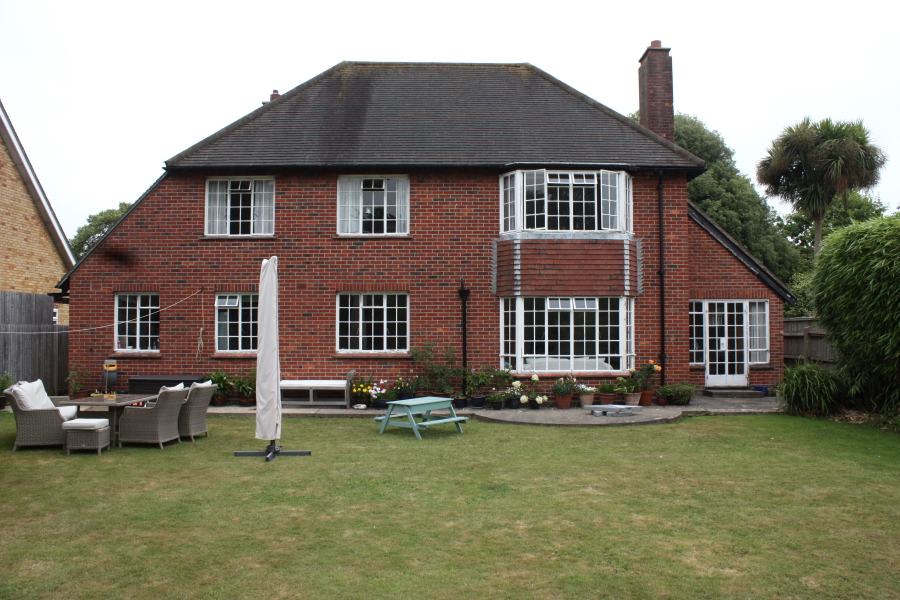 Our response was to design the extension as a group of differing height and depth gables that step out towards the northern side boundary which will also include a curved on elevation roof slope. This approach of stepping the building out along the rear allows the introduction of wrap around glazing to the 55m2 kitchen and family room.

The existing house which is very much in its original as built condition will benefit from a a full renovation and internal reorganisation.  The kitchen and dining room will be combined and extended as will the living room. Meanwhile the hall will be opened up to an adjacent study. On the first floor, three bedrooms will be extended with the master bedroom gaining an ensuite and vaulted ceiling.

Our well thought through design and clear drawings and proposals presented no obstacles during the course of the planning application, with the planning office at Gosport Borough Council being able to approve the plans without delay under delegated powers.

If you have a similar project in mind, give us a call or send us an email to start a conversation about your ideas.

We are just back from a trip to Palm Springs that helped us fall in love with bungalows and particularly modernist flat roofed bungalows. 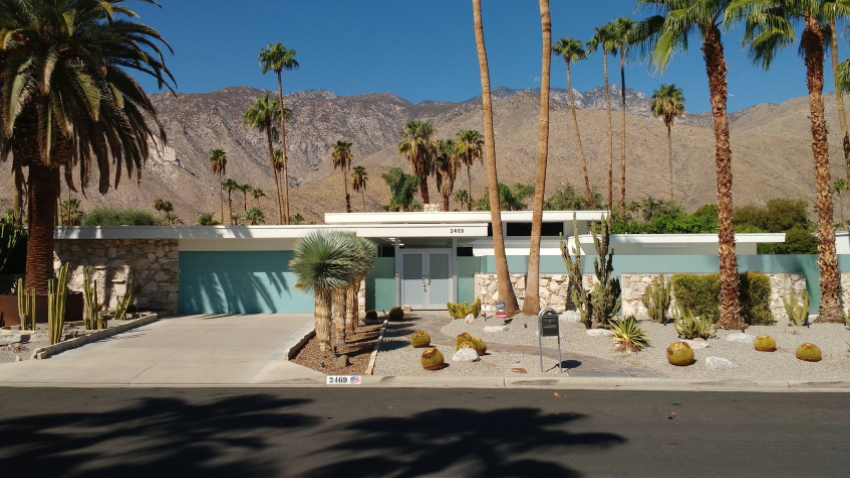 To make it absolutely clear, we are not talking about the plethora of dull tiled roof bungalows that were built in the UK in the 1950s, 60s and 70s that plague our suburbs and countryside. Whilst UK developers were busying themselves knocking out road upon road of uninspiring bungalows for empty nesters, Architects and designers in the USA were producing stylish single storey homes that were designed for modern living and entertaining. 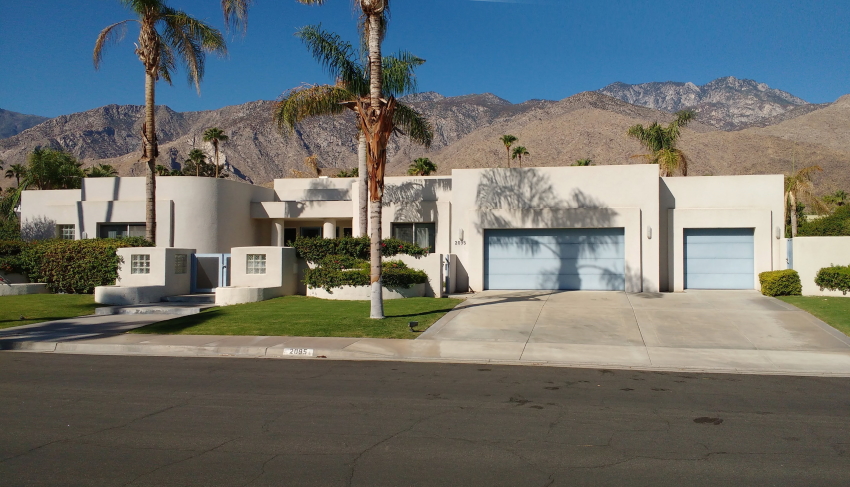 These mid century homes were typically built with privacy to the road frontage, had large areas of glass beyond, used natural and modern materials with clean lines that have a horizontal emphasis. Internally they have open plan layouts that blur the lines between inside and outside spaces. All of which sounds very much like a typical wish list for today’s contemporary homes. 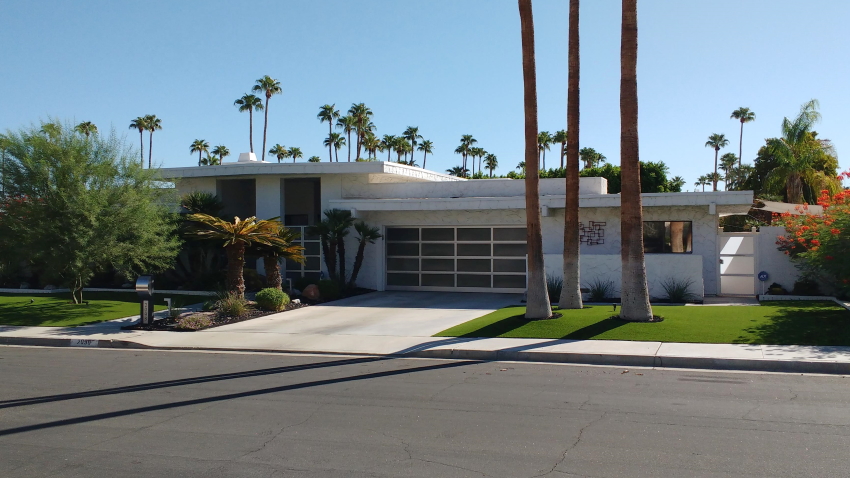 We appreciate that not everyone will get this, least of all the anti flat roof brigade who believe that no home is complete without a tiled roof, or indeed the people who think that each property should resemble the property next door. Whilst the homes in Palm Springs were designed to be low profile to allow amazing views of the mountains beyond, the same benefits of a low profile home which allow views beyond would be applicable in the UK. Indeed, we successfully won an appeal against a decision by the Isle of Wight Council to refuse permission on a project where we changed the design of the house from a pitched roof to a flat roof, by among other points, arguing that the design of the flat roof opened up greater views. Can you imagine the negative impact a pitched roof would have in blocking out the view of the landscape on some of these snaps that we took on our travels? 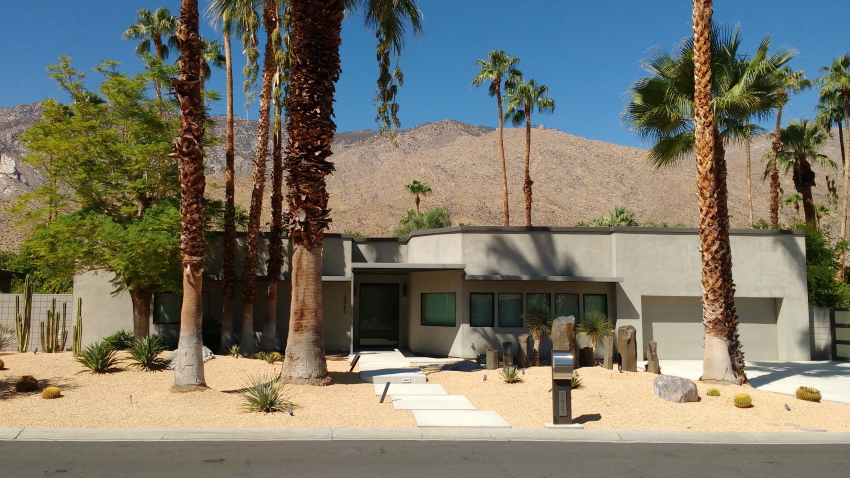 The modernist design has other benefits, flat roofs can cover any shaped floor plan and act as a simple unifying design element even when used with differing storey heights. Flat roofs are great for locating solar panels and cells out of sight or can even be constructed as a living sedum roofs for even better eco credentials. With all the rooms on one level, bedrooms can have side facing windows, which is not always permissible when bedrooms are placed on upper storeys. Space is not wasted by landings and staircases and storey heights can easily be increased in halls and major rooms of the property without repercussions to the upper level. 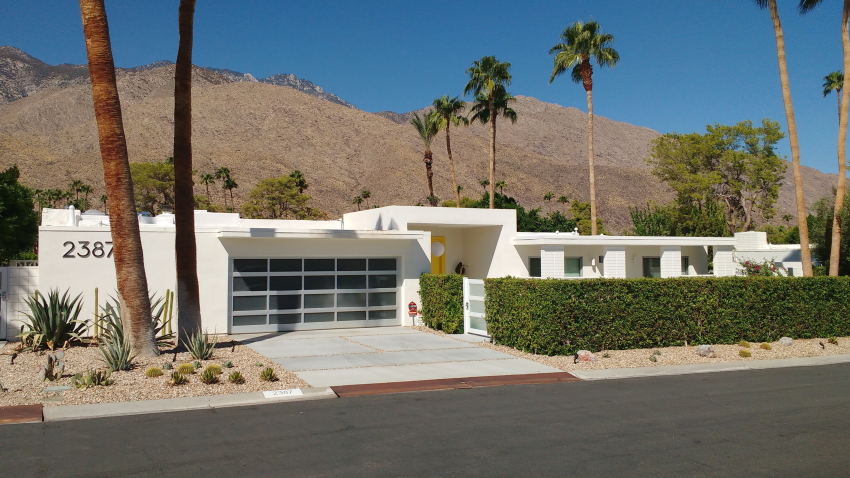 If you have a bungalow that you would like us to redesign as a contemporary modernist single storey home, please give us a call or send us an email to start a discussion about your ideas.

The remodelling project on a bungalow in Stubbington, Hampshire that we gained planning permission for at the end of May is now well under way. 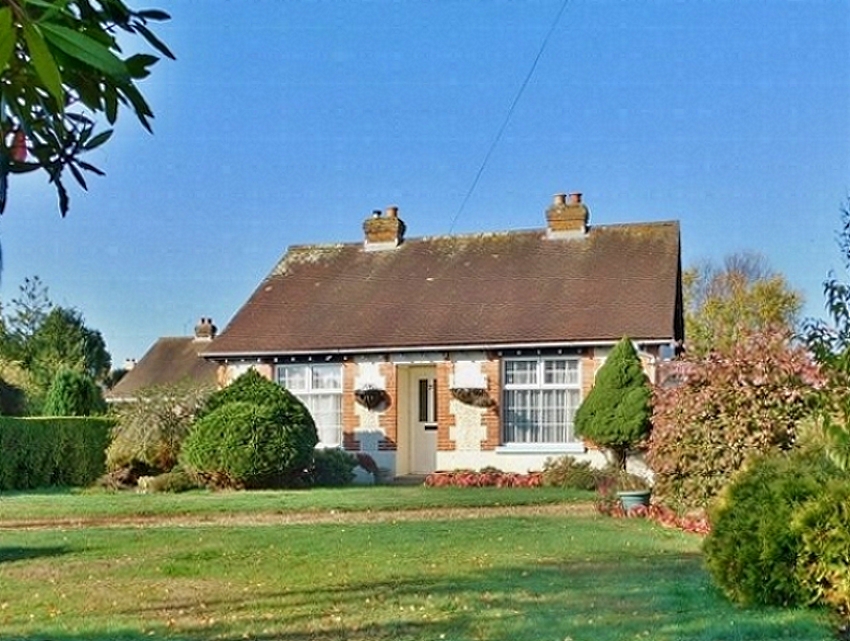 The project will see the bungalow extended to the rear and another storey added to create a modern family home. Our proposal adds just under 100m2 of living accommodation and  creates a 57m2 kitchen and family room at the rear. The kitchen will have a vaulted ceiling extending to 4.5m high, a glass gable overlooking the garden and a wide expanse of glass doors giving access to a south facing patio. 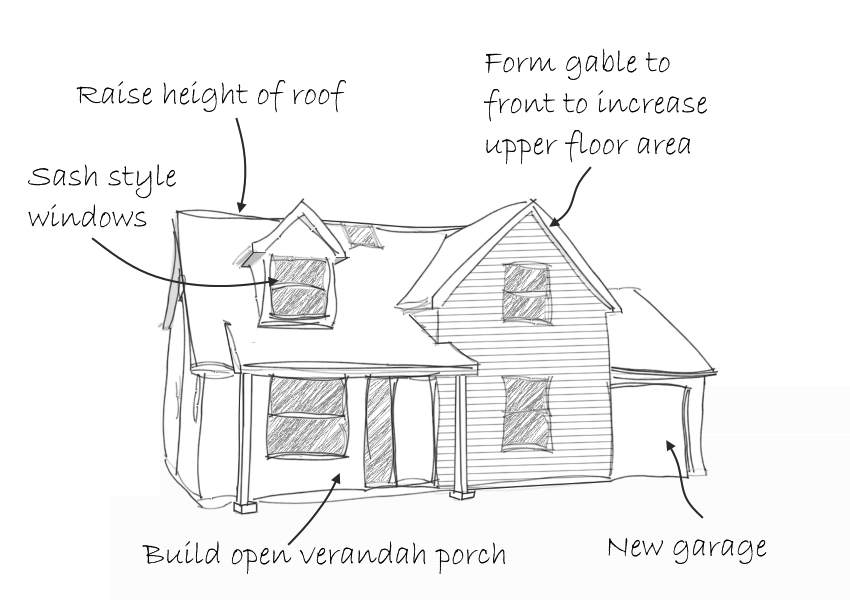 The ground floor also benefits from the creation of a larger living room, a ground floor WC and a new attached garage. Our clever reorganisation of the layout will see the hallway increased in width, a bright new entrance added and a welcoming open verandah constructed at the front. On the first floor, our design creates three bedrooms, two bathrooms and an internal hallway filled with light via an overhead roof lantern. 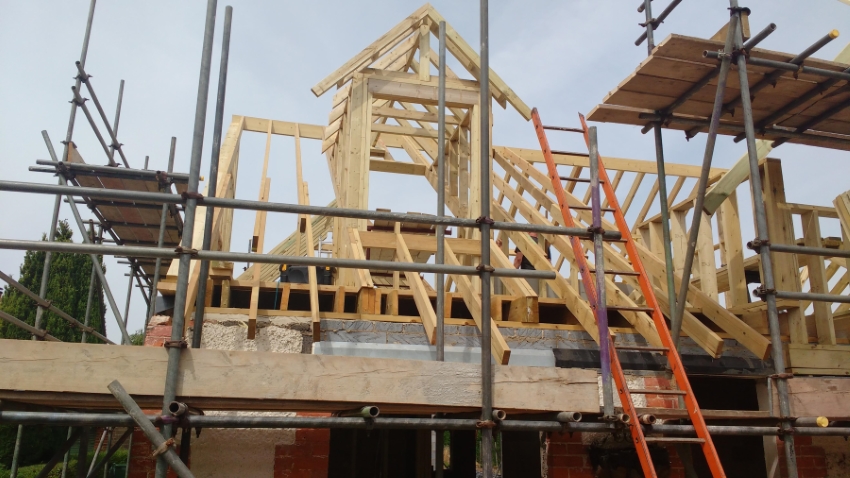 Despite opposition to the proposal, our well thought through design and clear proposals gained the support of the local planning authority who were happy to approve the application.

We are pleased to announce that we have just gained planning permission for the  extension of a 1950s detached house in Warsash, Southampton that will transform the interior layout. 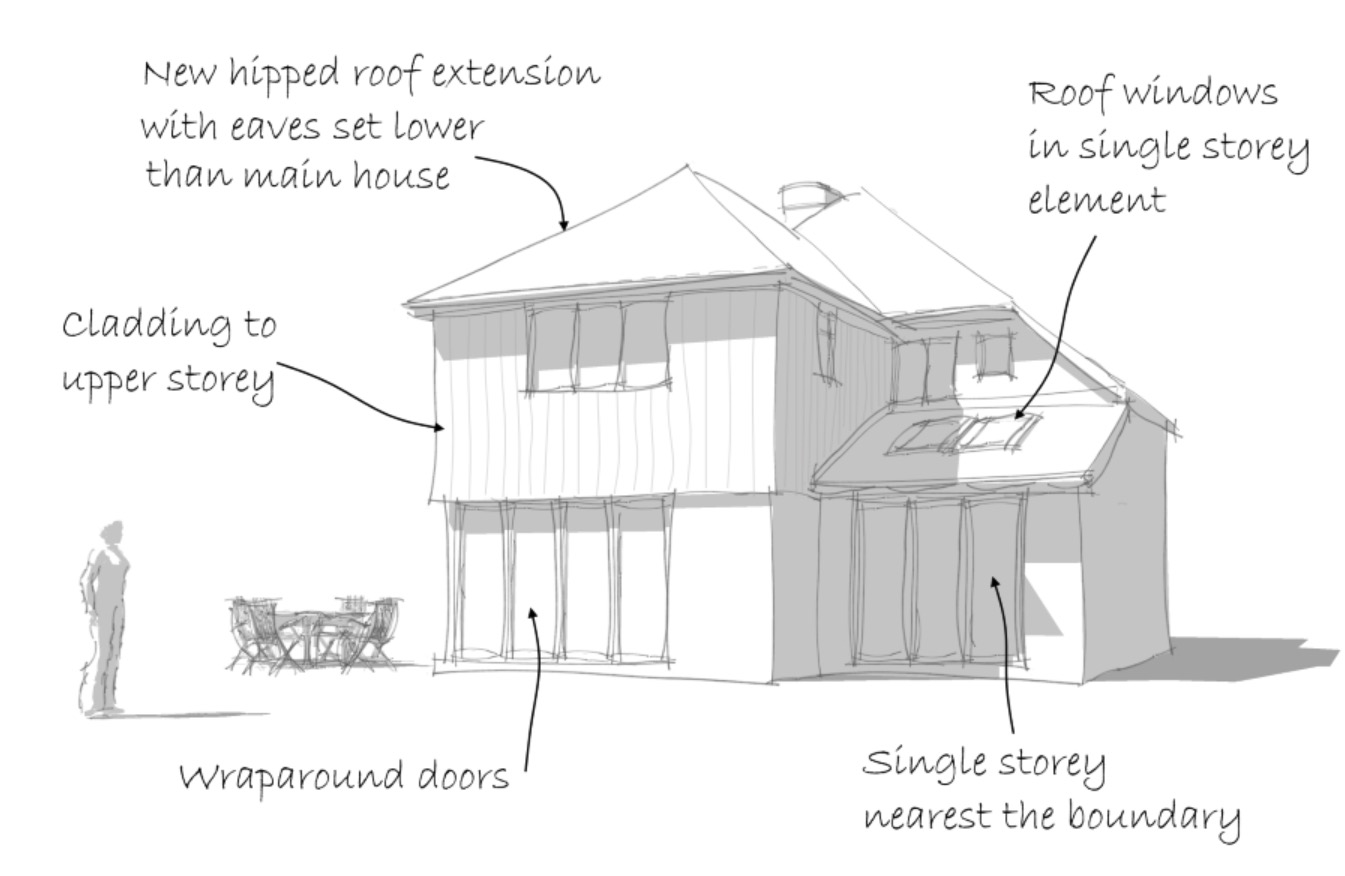 Our proposal for a single and two storey extension will update and improve the property, whilst creating a 52m2 kitchen with doors opening out on to the mature garden.

The house that has barely been touched since its construction some 60 years ago will benefit from a solution that will see the property remodeled internally by relocating the kitchen to the other side of the house, opening up rooms and adding a master bedroom and ensuite. The extension will incorporate wraparound folding doors that will allow great views of the garden and with the roof lights will flood the ground floor with daylight.

Our design concentrates the greatest mass and height of the building in the centre of the plot which allows the part nearest to the neighbouring property to be single storey. We purposely positioned the eaves of the hipped roof extension lower than the main house to provide visual interest and to create a subservient and not dominating feel to the extension on the house.

Once more our careful attention to design paid off with the planning application for the extended and improved home being well received by both the planning authority and the neighbours.

We are pleased to report that the scheme that we designed for the remodelling and extension of a rundown 1950s house in the Winchester district has now been completed. When we first visited the countryside property in 2016, the garden was overgrown, the house had fallen into decay with holes in the wooden floor, there were signs of damp in various places and the rooms felt cramped. 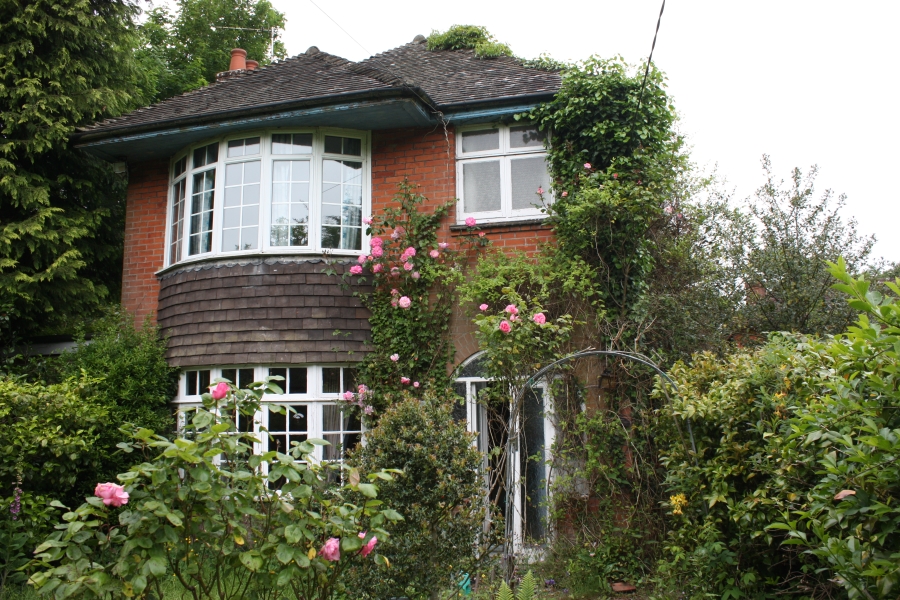 Our challenge was to come up with a solution that breathed new life into the house, whilst maintaining its charm and character. Our design solution reconfigured the layout by relocating the staircase and the kitchen, opening up rooms, removing walls and chimneys and building a new extension and chimney to the old house. 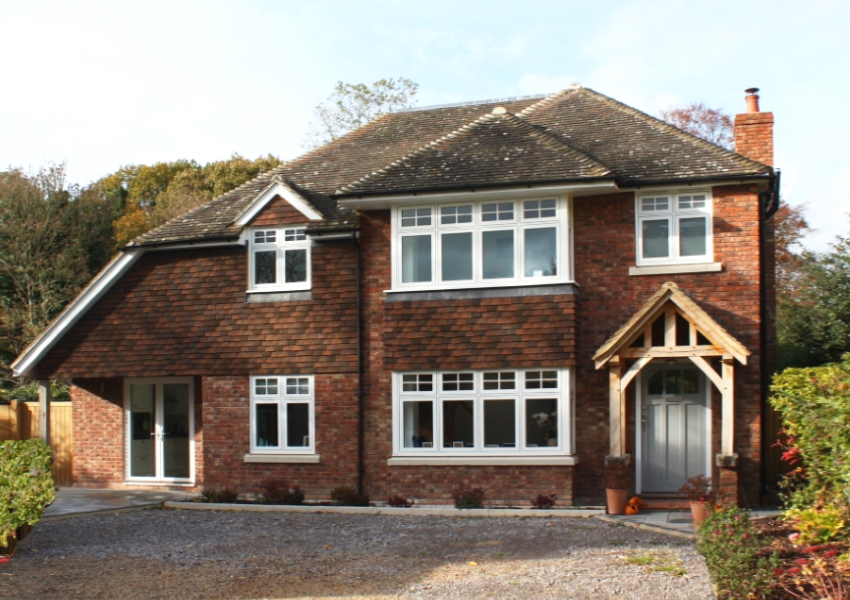 Our design created a two storey extension which went alongside and over the top of an older flat roofed addition which has increased the house from just over 120m2 to 190m2 .

Brickwork, a stepped elevation, hipped roof and salvaged plain tiles have allowed the extension to fit seamlessly with the original house. The upper storey of the extension is partially set into the roof with the front eaves line purposely set lower than the main house and the windows to the side and rear being dormers. 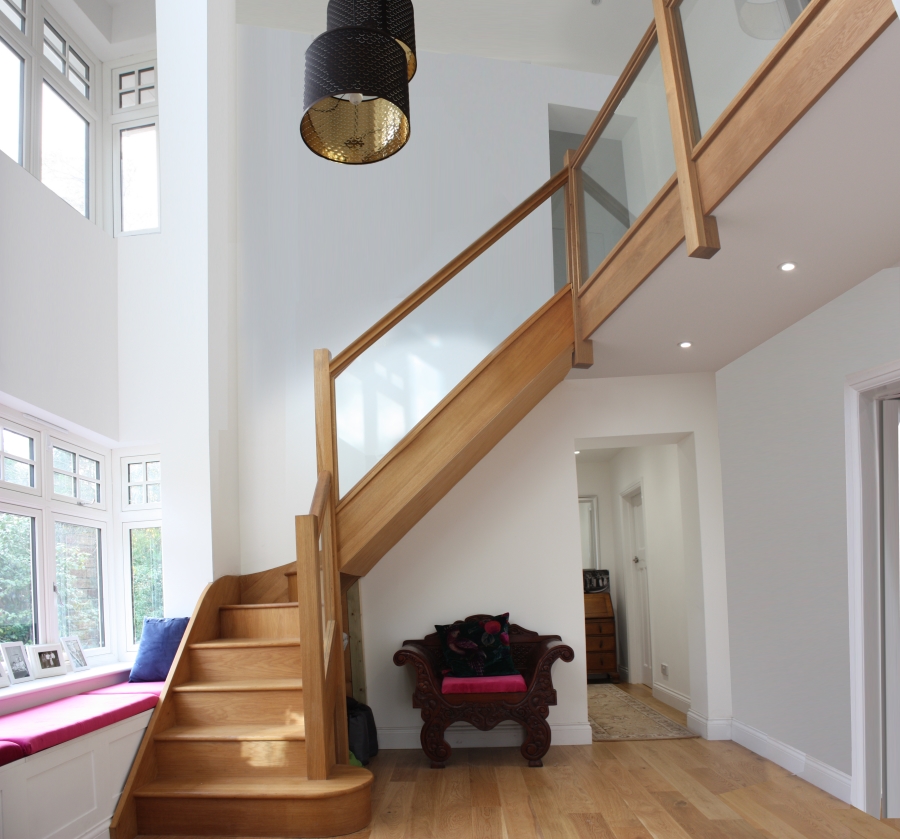 Relocating the staircase is always a daunting prospect, but our clients did not need much convincing of the benefit of knocking the narrow hallway into the original living room and then removing the floor above to open the newly enlarged hall into the the upper bedroom to create a light filled two storey galleried hall. 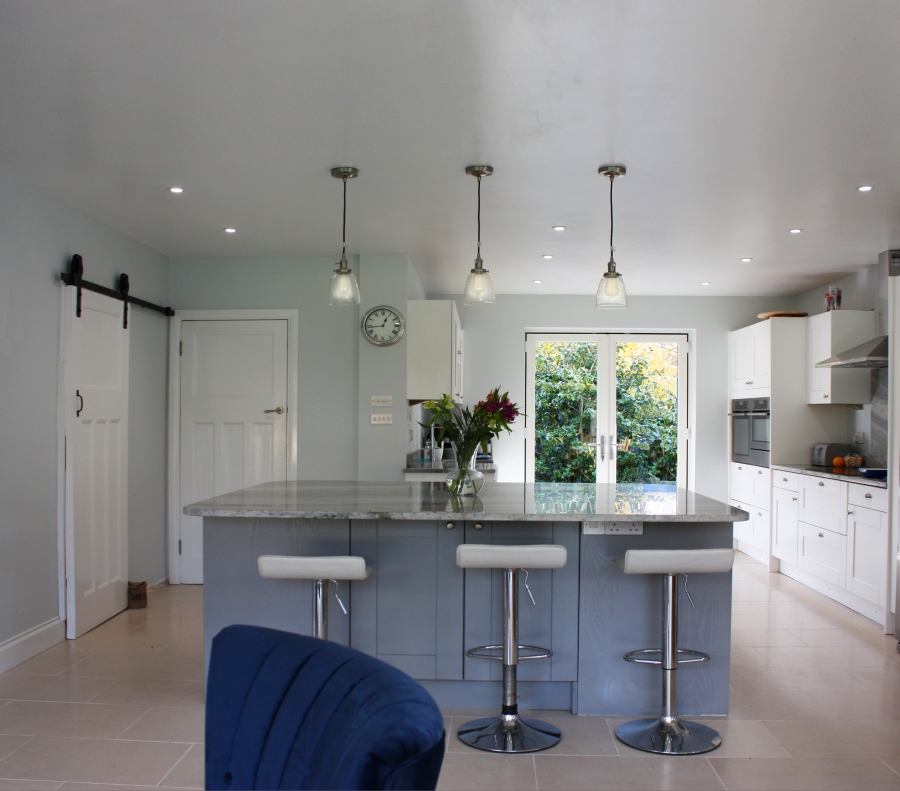 Relocating and extending the kitchen has allowed it to have windows on three elevations and to become the hub for a busy family.

We are pleased to announce that we have just gained planning permission for the remodelling and extension of a 1960s bungalow in Fareham which will transform it into a a contemporary house. 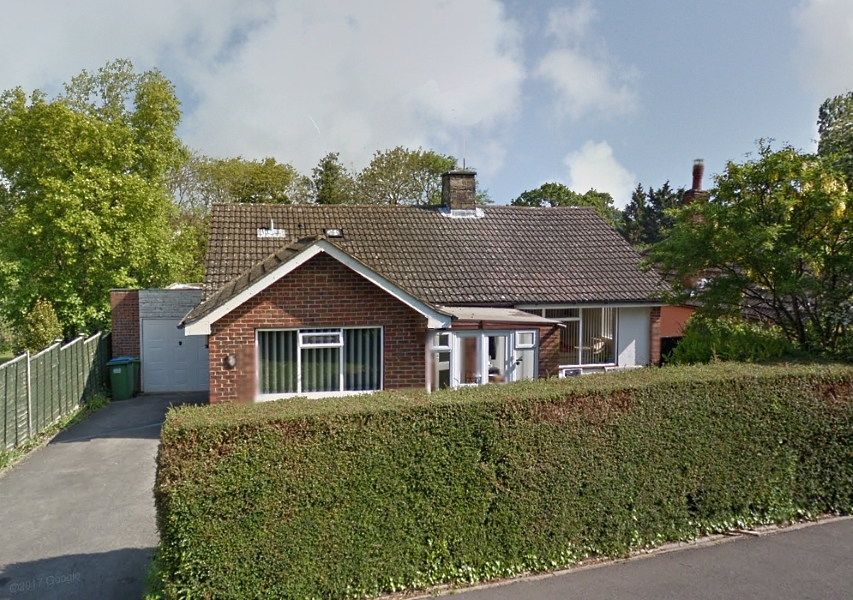 Whilst we might make the transition from single storey bungalow into a desirable house look easy, obtaining that all important planning permission was anything but straight forward.

With consideration about the impact of creating a two storey house with bungalows each side and concerns about the overall height of the proposed property, our initial response to a client that loves all things modern was for the property to become a contemporary flat roofed house. Rather than simply raising the external walls and adding a pitched roof as others have done in the road, our approach was to set the two storey element back from the part of bungalow nearest the road and to set it in from the side gable wall nearest the neighbour. However our cutting edge design did not cut it with the planners. Despite no opposition from the neighbours, the planners initially said that the whilst the design was commendable, they did not wish to see flat roof houses being built in the main Fareham area and that the design was too bulky. 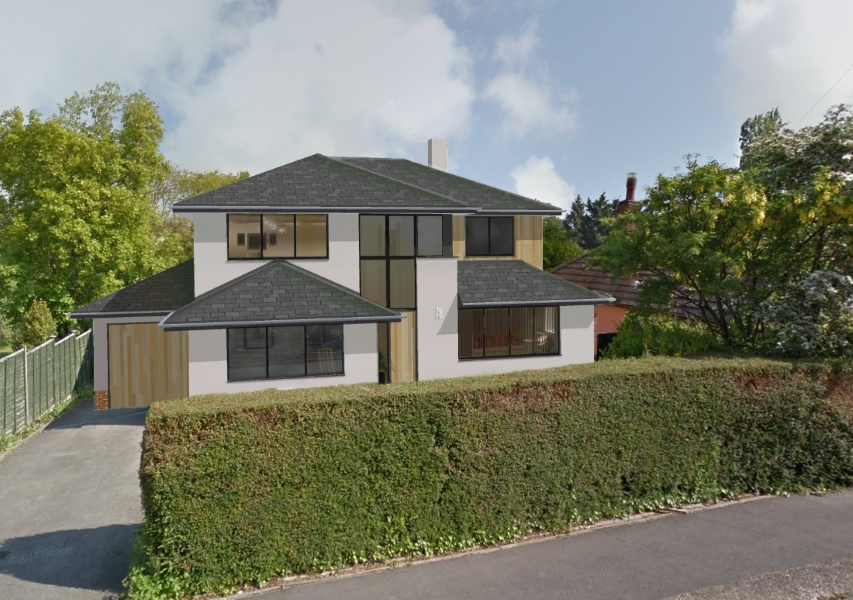 So having got nowhere with the flat roofed house, we turned our thoughts to a shallow pitched hipped roof design, which bizarrely gained the approval of the local planning authority despite being bulkier and taller than our earlier plans.

Our design will see the entire roof of the bungalow removed and another storey added, with a two storey extension being built to the rear. The design will incorporates a series of different shallow hipped roofs at both the ground floor and first floor levels, wrap around glazing and rendered and timber clad elevations. The design follows the stepped approach used for the earlier flat roof design but has been fully reworked to make it fit the hipped roof design.

Inside the house will have four bedrooms, bathroom and ensuite on the first floor, whilst the ground floor will be reconfigured to include a large open plan kitchen / family room (55m2 ) with wrap around glazing on three elevations, study and living rooms.

By adding 100m2 of additional space, the design will more than double the size of the original bungalow.