At the end of the summer the Government announced in a blaze of publicity that for one year only the rules on Permitted Development (work that can legally be undertaken without planning permission) would be relaxed. The story indicated that the relaxation would double the size of extensions that could be built without permission. The change it was said, would free householders of the red tape that usually accompanies a home extension, thus allowing more building work which would aid the economy.  The story made the main 10.00pm news and for a couple of days was chewed over in the national papers until they lost interest. The headline figures quoted were that householders would be able to extend a detached house to the rear by up to 8m in depth without obtaining Planning Permission and a semi detached or terraced property by up to 6m. 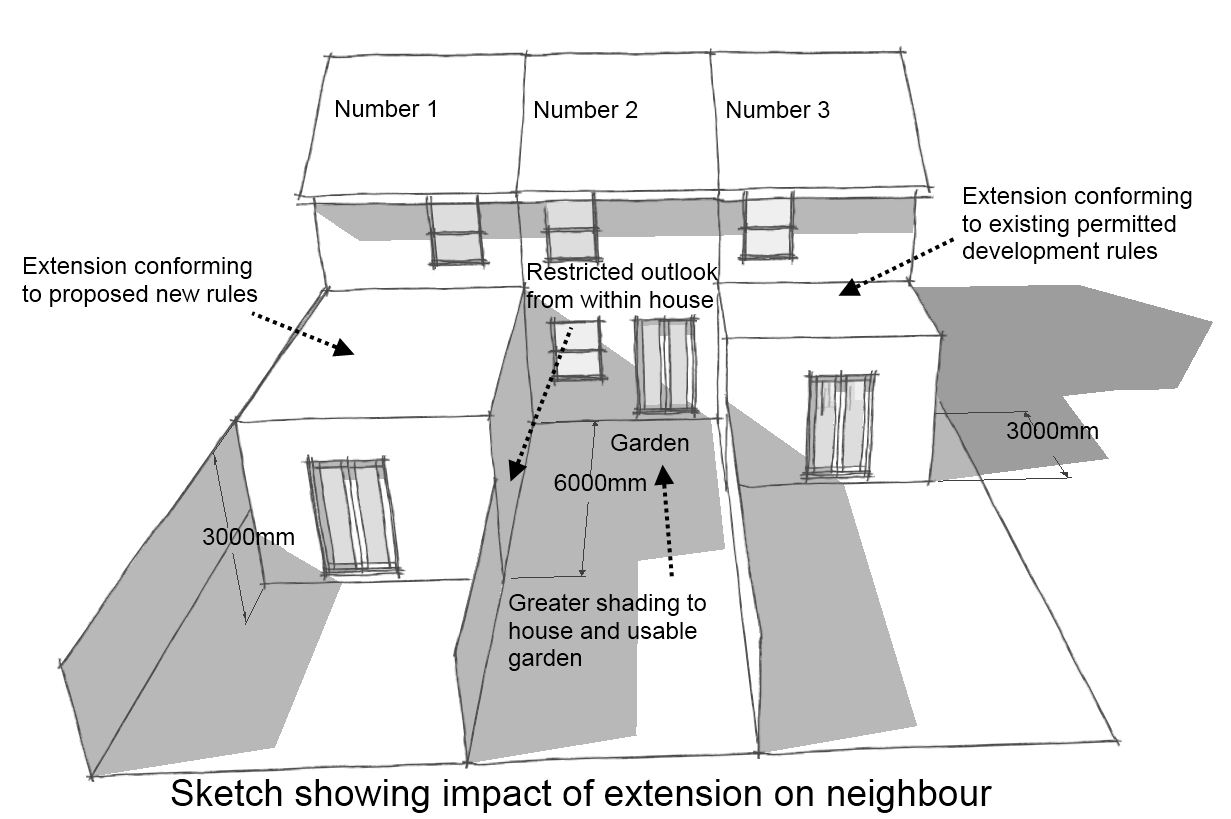 For a week or so after the story broke I found myself having to explain to clients the potential impact on their proposal. Not that I purposely set out to design schemes that will not need consent, but removing a layer of red tape in not having to gain planning permission has to be a good thing or not?  I don’t take any planning application for granted, but on the smaller projects the demands of many planning offices are disproportionate to the scale of the proposal. And as every application boils down to a subjective view as to whether the planning officer or the local councillors support the scheme, it is an obstacle I would rather not negotiate unless needed. So on smaller projects it is appreciated when the project can proceed as permitted development without the uncertainty and extra hurdles that a planning application entails.  So given my position you would think I would relish the opportunity to design larger extensions without the interference of the local planning authority. However, despite the benefits of greater freedom from planning I strongly oppose the changes.

The current rules on Permitted Development which can be found on the planning portal extend back to 2008 when a project and impact based approach was introduced to determine whether something required permission. The project impact based approach, allowed a greater degree of freedom for householders to extend their properties controlled by various dimensional constraints that protect the surrounding neighbourhood. The dimensional constraints are the only protection that neighbours’ have from unneighbourly poorly designed or located extensions.  For example an attached house can currently be extended by 3m to the rear with a single storey extension.  Whilst the 3m depth is most likely an arbitrary figure with little logic or science behind it, it does never the less allow an attached house to be extended by a reasonable but small room depth, or more often when opened up to an existing room at the rear of the house, can create large room depths which are typically 6 to 7m deep. In addition 3 m is around the depth that a lean to tiled roof can comfortably be pitched to allow a waterproof roof to be installed beneath most upper windows.  The 3m depth invariably has an impact on the outlook of adjoining neighbouring windows, creating partially restricted views when looking out of windows which are sited close to the boundary and a degree of shading which varies with the orientation of the property.  But at 3m a neighbouring extension is unlikely to appear as a dominant or be highly detrimental to the neighbours’ outlook.

The changes have no logic

If the existing rules on Permitted Development have little logic or science behind them, the proposed changes have absolutely none.  The changes can only be viewed as a knee jerk reaction to a politicians’ question of “how can we double the number of extensions built without planning?” to which the response by some civil servant was presumably “Double the permitted depth.” This statement assumes that there is the same number of people wishing to add 6m to their homes as there is wanting to add 3m. My experience as a designer having talked and listened to over 1000 people wishing to extend their home does not support that view. In my opinion the distance needed to double the number of projects not needing planning would be around 3.6 to 4.5m.

What people want when it comes to extending

The very notion that doubling the permitted depth would double the number of extensions that could be built without planning, shows a complete lack of understanding of how the majority of people think about extending their homes. Typically people want to add a room or add extra space to an existing room, adding 3 to 4m gives them that space. Adding 6m to an existing room would create a room depth of say 9 to 10m which on an attached house which are usually narrower than detached houses would be a crazy size, that arrangement or one that involved the space being divided up into smaller rooms would also create problems of natural lighting in the old part of the house. The suggested 6m depth also overlooks the fact that the majority of householders care about the look of their house and do not necessary extend to the maximum permitted, but will limit the size if it can result in a pitched roof that better matches their home.  These same people will often have an interest in not upsetting their neighbours and would again limit the size of the extension near the boundary so as not to cause offence.

It is therefore people who do not consider the need for their own property to have a particularly good layout with natural lighting that will benefit from the proposed changes. These same people are unlikely to care whether their extension echoes the style of their house and will ignore any consideration of the neighbours in their bid to build the maximum permitted extension.

Under the new proposal, a householder wishing to add a flat roofed extension could build a 3m high wall, 6m long on the boundary with an adjoining neighbour.  Such an extension would severely restrict the outlook from the rear of the neighbouring property and subject to the orientation cast large areas of shadowing on the rear windows whilst rendering parts of the rear garden in shade. If this were to happen on both sides of a terraced house, the outlook would be tunnelled and the shade would make parts of the garden effectively unusable. The middle neighbour would suffer at the cost of allowing the neighbouring properties to extend. In the existing course of events these extensions would require planning permission and would rightly be refused by any sensible planning authority.

If the existing rules on Permitted Development are based on a project and impact based approach, the proposed changes will throw away any regard for the consideration of the neighbours and could no longer be said to be based on impact.